[Originally published 4/07 at pegasusnews.com]
Olivella’s isn’t as uppity as all that, and it doesn’t have back-door service.

Being across the street from SMU, some of its prime customers are fashionably shoddy college students, as you can see in the pix below. But, being in HP, fluorescent lights and asbestos ceiling tiles won’t bring in the neighborhood. The obvious thing to do in that situation is to go with a “California” look. And that’s what they’ve done. 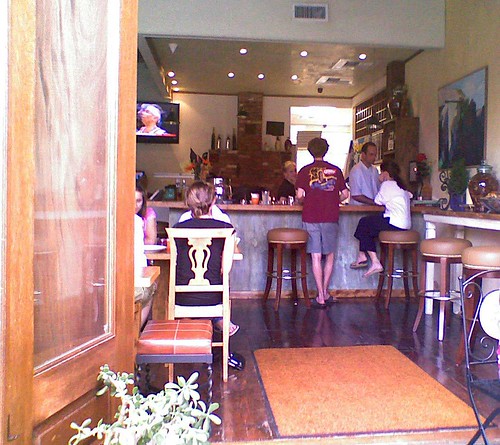 Lots of wood and wrought iron make the place seem more like a winery tasting room than a pizza joint. Golden oak doors open out to the sidewalk where there are three cafe tables. Maybe 10 nice wood tables fill the inside and stools line the bar, looking like a parade of leather-topped mushrooms. The bar itself wraps around the brick oven/dough prep area and runs along one wall.

I saw no tossing of dough, though it’s not really necessary for pizza. Nor did I ask if the water was imported from the NYC public water supply — which, incidentally, comes from Delaware, Greene, Schoharie, Sullivan and Ulster Counties, and may contain radiation, substances from human and animal activities, microbial contaminants, pesticides and other tasty, dough-enhancing treats. [1]

Speck is insignificant. I didn’t order it. And it was hard to find a truly original pizza on the menu. You have your pear and gorgonzola (plus hazelnuts). The standard margarita. One dedicated to imported Bufalina. Basically, the menu appears to be the same as described in the story about L’Asso that tg links to. There’s nothing wrong with tradition, and if those pizzas compare with the pizzas I ordered you’ll have no reason to complain, as you people so often do. 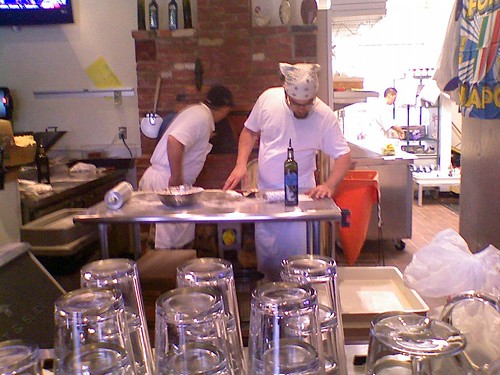 The “diavolo” pizza’s spice comes from both jalapenos and red pepper capicola. The dice on the jalapenos was small enough so they were hardly noticeable, and the heat didn’t obscure the flavors from the dollops of tomato sauce or the house-made mozz. Come to think of it, the sauce has chipotle in it, too. I should have stolen a menu.

The second pizza, a San Daniele, is topped with prosciutto from that region, the above-mentioned cheese and a pile of arrrrrrrugula. The ham is slightly sweet, crispy on the edges and salty-chewy in the middle. I usually don’t like prosciutto on pizzas, but this stuff went well with the bitterness of the arugula. I might eat another piece one day.

I can’t make a call on the crust and the effect of local tap water vs. NY sewer water. I got both pizzas to go, and to really judge a crust I think you should eat it right out of the wood-fired oven. I, however, usually wait a minute or two for it to cool. Both crusts held up to the drive home, had the requisite puffy charred edges and both a snap and a yield. The 12-inch diavolo was cut into only four slices, which is just dumb and hopefully a mistake. The Danielle had a nice eight.

Prices for the twelves run between $13-$17. They also have a larger, thinner, rectangular “Roman” style crust that starts at $17, if I remember right.

The place is good, but I didn’t get the head rush I got when I first tried Fireside Pies or Campania. I don’t know if that’s because I got the pizza to go, or if I’m completely spoiled on good pizza. I’ll go back to find out.